It’s definitely a huge relief that my millinery collection bound for NYFW is complete and on its way. All the other jobs on the NYFW to do list, however, just keep coming … the models, their shoes, dresses, hair and makeup, the music, promotional goods, naming, pricing, programs, media and of course the question on everyone’s lips, what I am going to wear?
Among the ever consuming list of Fashion Week preparations, we’ve also had the Broome race round and the famous Ladies Day and Cup Day.
I finally finished creating the last Broome Cup bespoke commission piece, which incidentally I am proud to say was for the Hon Julie Bishop, on the eve of the race event which was just in the nic of time to make it to the local Broome rodeo.
This annual, action packed, rough riding event brings the bush to town for an evening of thrills and spills and for most, is the perfect warm up for the Broome Cup races the next day.
My visiting girlfriends and I were throwing down some celebratory beverages to signify my finishing all hats and our long and overdue reunion, when we were introduced to Arno, a young station hand from a Kimberley cattle station.
Arno was working for friends of mine so I had already heard about this handy backpacker that within moments had us greatly entertained. His story telling combined with his Belgium accent had us in fits of laughter, particularly with the story of working on the horse barriers at Ladies Day, when he noticed a lady with a shocking rip in her dress. Arno had us on the edge of the rodeo arena with the story of how he whisked her away into his van and promptly sewed up her dress. Who would have guessed that Arno the station hand was a Belgium fashion designer as well?
“Show us your work” we echoed as the dust filled our jaw dropped mouths. With one eye focussed on the bull ride, the other scrolled the exquisite fashion work of Arno, our new and fashionable friend.
“Perhaps you could make my after party dress for New York Fashion week” I said, to which he excitedly replied “Of course”.
Well, that was the beginning of another thread to this journey. Arno grabbed an empty pizza box half buried in the arena dirt and after finally finding a pen, he quickly started to sketch.

“I can’t have anything long” I said, because my legs are short”.
“I know”. He replied.
“And I don’t have a waist,” I quickly added.
“I know” he said, with a slight edge of pity. How he could see these self confessed flaws I had no idea, as I was wearing a jacket, scarf and jeans.
Within minutes the crowd around Arno and his pizza box grew and when he revealed the final draft of my after party dress everyone gasped as loudly as when the ringer proposed to his girlfriend in the arena earlier that night.

The next day Arno arrived to take my measurements and borrow my sewing machine to set up at his campsite in Broome and sew a practice dress. Four hours later he was back and pinning me into this draft creation that I would have been happy to wear to the races! This is one very talented man!

The next day I met Arno to purchase his chosen materials for the final masterpiece and set him up in my hat studio before I headed off to my day job. I returned that evening to be pinned into the creation that had me speechless. I felt like a princess, like Carrie Bradshaw herself on the streets of New York. I was in awe.

After a few more alterations and an early night, Arno set off for the four hour drive back to the cattle Station where he spent the week fencing and working with cattle by day and sewing my NYFW after party dress by night.
I’m yet to see the final product that will come into town from the Station this week but I’m feeling completely confident and totally excited that while other tasks remain unachieved on the NYFW list, not only do we have yet another magnificent chapter to this story but I have no doubt I will also soon have a spectacular, truly unique NYFW after party dress.
Keep smiling and stay tuned …

and here’s Julie Bishop in her Hats by Felicity headpiece. 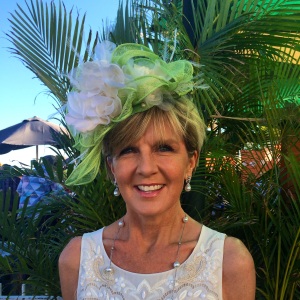