Ya’ll come back now ya hear

From the moment I walked down this honkey tonk town I had a grin from ear to ear.   It was only 10 am and already Tootsies was going off and with an inquisitive crowd gathering on the sidewalk to get in.  And every other bar was just the same.

A walk down Nashville’s Broadway takes you on a door to door pub crawl with live music belting a tune from every single bar.  Multiple stories host multiple bands.  The music confusion starts from the top of 5th avenue but as you progress down the hill you start to choose to which bar you are headed. 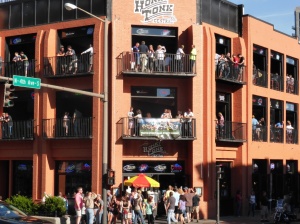 It may only be breakfast time but regardless, people are singing, dancing and drinking up and down, in and around, even peddling bars through the streets.  After all, it’s 5pm somewhere.

My first impression wasn’t that overwhelming but unbeknown to me at this stage no one else was awake yet.  Other than those already (or perhaps still) in the bars.  A few hours later however, I was completely overwhelmed.

The first place I wandered into in Downtown Nashville was not a bar (believe it or not), it was The Corrin Bros. Hat Shop.  A scrumptious, authentic, stylish hat shop; primarily supplying men’s hats but with an atmosphere to attract all.  There is something very antique about a hat shop.  Memorabilila adorns the walls and the smells of leather and felt sooth the senses and the soul.

Nashville is full of history and memorabilia honouring musicians and the music and movements they created.  Country music particularly is everywhere, even coming from speakers on the sidewalks and buskers on the street.

Whist I was happy to throw cash into the guitar case of a busker I have to admit I was uncomfortable with the amount of beggars in the streets; this was the case in  NYC too.   They sit on the pavement with their head down, holding a cup and a sign asking for money.  One such sign held by a woman in Nashville saying she was pregnant and broke was later spotted being held by a significant other woman, which didn’t make the beggars anywhere near as authentic as the boots. 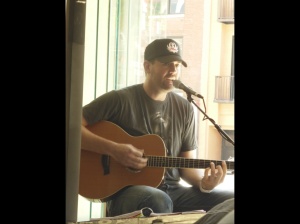 I also came across another style of money making in Nashville.  The male and female bathroom attendant has everything they can think of that you might possibly need from perfume to lollipops.  I was taken completely unaware when I came out of the toilet and this woman held me up with a pump soap.

When in Nashville you’ve got to see a concert and I went to the Bridgestone Arena to see Blake Shelton.  Bridgestone holds 20,000 people which is more than the census population of Broome.  I was so overwhelmed at the crowd and in awe of the performance that I had to have a beer or three.  With beers this size you can’t have too many more.

As well as the music and the boots it’s all about drinking in Nashville and Blake, like all the bar performers hollared to the crowd to hold up our drinks, just to make sure everyone is drinking.  Hmmm … music, boots and compulsory beer drinking – I took a liking to Nashville Tennessee.

The Blake concert too, was nothing short of magnificent.

In NYC on the Sex and the City tour I met up with some women from Victoria, one of whom was going to be in Nashville the same time as me, so of course we ran into each other in the street.  I didn’t recognise Jodi at first who was sporting a new NYC hair do but I was thrilled that Jodi spotted me.  It was great to catch up with Stuart and Jodi for a few beers and corn cakes.

Travelling on your own has its definite advantages but it’s great to have someone to catch up with too and it’s always wonderful to meet new people.  Of course they have a friend that lives in Broome.

In one of the many boot shops in Nashville I came across a stunning collection of antique ladies hats.  This was the most beautiful find and one unfortunately I was not allowed to photograph.  The hats were purchased by the shop owner from a deceased estate and were for sale for $100 US each.  They were beautiful. All so small they wouldn’t fit a single head that I have measured, though.  So I soaked up their beauty and headed my boot scootin way.

If you love music and boots, whiskey and beer then you will love Nashville Tennessee.

This down-under milliner took a great liking to the place that is most certainly all about the music, boots, HATS and beer.

Posted in General, On the move to USA - September 2013